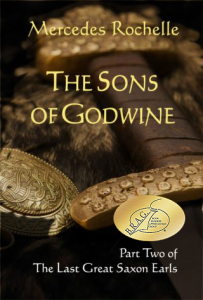 As if writing a trilogy of historical novels about one of the most important epochs of the western world wasn’t a large enough task, Mercedes Rochelle in Sons of Godwine adds an additional challenge: Various members of the Godwine family each tell the story in their own voices.

Godwine was the founder of a dynasty in Anglo-Saxon England. Perhaps the most famous member of the family was his son, Harold, who in 1066 A.D. was barely defeated by William the Conquerer. The Anglo-Saxon loss to the Normans changed the course of history for both England and the world.

The first book in the series, Godwine Kingmaker, followed Godwine from when he was a child to become one of the most powerful men in England. Sons of Godwine continues the story of the family past his death toward the fatal battle at Hastings.

Harold, appropriately, is one of the most important voices. He comes across as a natural leader of men: charismatic, clever, and strong. As with all of us, however, he did not live in a vacuum. He had family, friends, and enemies. In this book, we see the bonds and tensions common to all families. This is especially the case with Tostig, who has ambitions of his own and, as we find out, is envious  of his brother. The voices of other family members, such as brothers Leofwine and Gyrth, are also heard.

Capturing a character’s voice is one of the difficult jobs of a writer. When a character tells the story in his own words (first person), the voice must be consistent throughout, the events must  be only what the character himself observes, and be unique so that, as when hearing a friend, the identity is instantly recognizable.

Rochelle has taken pains to differentiate the characters, from Harold’s strength to Tostig’s growing dissatisfaction with his brother. She does so not with melodramatic flourishes, but with subtle phrasings and the events that each character tells about. One good example is when Tostig, who is desperate to show he is in charge of his earldom, orders the hands of a group of brigands to be cut off. Is this the best option to show his authority? He thinks so. Other members of the family may have reservations.

“I would guess the high point of Harold’s early career came when he conducted his Welsh campaign against Gruffydd ap Llewelyn. It was an altogether different kind of offensive: fighting against wild men who didn’t understand the first thing about real warfare. Harold would have had a difficult time of it, if I wasn’t there to help him.”

As always, Rochelle captures authentic history,. She shows how politics works in a time where violence, murder, and warfare are all acceptable tools for advancement. Where “natural rights” are nonexistent and entire communities can be killed for little or no reason. Where cruelty is common and accepted.

After one of his victories, Harold orders the enemy dead to be remembered by mutilating their bodies and “the men became accustomed to chopping off Welsh heads, and even made a gruesome game of it, tossing those trophies to each other rather than walking them over to the pile.”

Experiences of love and tenderness, such as many of us have known, also exist in this world. Times such as when you spend the night with a woman you love and “dawn came too quickly.” Or upon separation and one’s face shows “such a strange look” of love and pain.

And speaking of history…

One of the great unresolved questions of history is whether Harold or William had the best claim to the kingship of England. A related question concerns what was in an oath made by Harold on a trip to Normandy. Did he agree to support William?

Rochelle provides plausible answers to these questions, which I will not reveal here. The reader can form his own conclusion, as history continues its inevitable way in this continuing series.