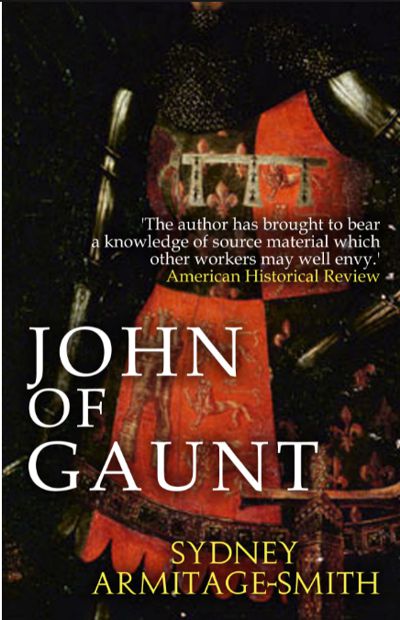 John of Gaunt is an enigmatic figure to most of us. You can’t help but remember his famous speech in Shakespeare’s Richard II, using a play of words with his name. But by then he was at death’s door—weak and pitiful. We know he was hated by the city of London and lost his fabulous Savoy Palace, burned to the ground during the Peasants’ Revolt. He has come down to us as an arrogant, unyielding, aristocratic noble, but with the help of this biography we get to see the subtler side of Gaunt. He seems to have started out as all those things we remember, but throughout his career he became a successful and valued statesman, ambassador and—most importantly—protector of the king’s prerogative. Although many assumed that he had designs on the throne for himself, in reality it would have been against his honor to usurp the king, no matter how helpless, deserving, or ungrateful Richard may have seemed. He had his own crown to chase down—Castile—and though his efforts proved useless, he did manage to marry off two of his daughters to Spanish heirs who begat lines of kings that lasted hundreds of years. If he had been as good a general as he was a negotiator, perhaps history would have been kinder to his memory.

Here’s a good representation of Gaunt’s proficiency (during the Peasants’ Revolt while he was in Scotland): “John of Gaunt was a true Plantagenet; no sign of fear betrayed his secret to the Scottish envoys. While his couriers were riding with orders to the constables of his castles in Yorkshire and on the Welsh marches to garrison them for a siege and admit no one without letters under his seal, the Duke quietly went on with the negotiations, and by the offer of liberal terms persuaded the Scots to prolong the truce. Not till the compact was sealed did the Scots learn that they had lost the golden opportunity of attacking England in the hour of weakness.”

Richard, who disliked and feared the power of his uncle, encouraged him to go and claim his crown in Castle—only to discover that once the Duke was gone, he had lost his only protector. The Lords Appellant, intent on removing the king’s advisors, stripped Richard of all his powers while Gaunt was overseas. Richard learned his lesson well, and once he was in control again, recalled his uncle and showered him with favors. By then Gaunt had achieved the height of respectability and for the rest of his life he championed the king and strove to secure the future of his heirs. The author gives us a well-rounded depiction of this oft-maligned Duke, and I came to understand his disappointments as well as his accomplishments. I suspect he would have disapproved of his son’s usurpation of the throne, but of course Richard waited until he died to commence his scheme of depriving Henry of Gaunt’s vast patrimony. This was a well-written biography and quite useful to understanding the period.