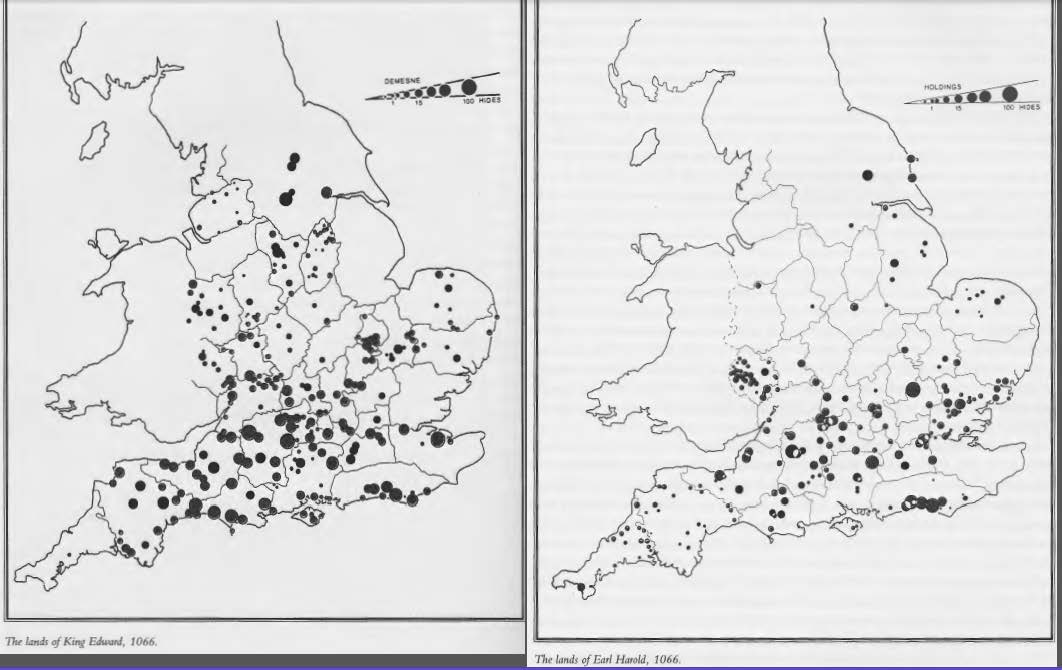 These maps were taken from Ian Walker’s HAROLD, THE LAST ANGLO-SAXON KING. Because I read that Harold was the wealthiest landowner in England, I was particularly taken with the big difference between what he owned as Earl and Edward the Confessor’s personal wealth. How much would Harold have inherited at Edward’s death?

Walker devotes a whole chapter of his book to Harold’s lands and wealth. According to the author: “There are four principal sources of lands in this period. The first was family land inherited from relatives. The second was ‘bookland’ or land granted by diploma, most often by the king or another lord and in return for loyal service. The third was land attached to an office like that of an earl… The fourth was straightforward purchase.”

We know that Harold inherited a great deal of wealth from his father, who was granted many forfeited estates by Canute. It’s interesting to see how much land Harold owned in East Anglia after having ceded that Earldom to Gyrth. Presumably some of these lands were granted to him by local men to secure his support. Also, his wife Edith Swanneck was wealthy in her own right and many of the estates came with her. We see a heavy concentration of properties in Herefordshire, which probably came from Swegn’s forfeited estates, possibly from the murdered Beorn, and from Earl Ralf, who died in 1057.

The author gave us their relative values, calculated from the Domesday book. In 1066, Harold’s land values were £2846 plus £836 held by his men. The whole Godwine family held lands valued at £5187 plus £1428 for their men, while King Edward’s land was only valued at £3840, plus the value of his men, which was the land of every man in England! I would guess the latter uncalculated value would accrue to Harold once he became king? And what of the rest? It’s pretty mind-boggling to me.

What of Bosham? Perhaps it belonged to his mother? I have more questions than answers, but that’s history for you.