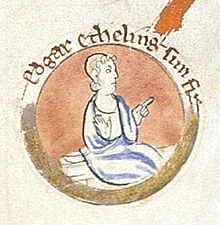 Eadgar Aetheling was a Saxon prince and grandson of Edmund Ironside, who was briefly king of England in 1016.  He was born in Hungary where his father lived in exile, and in 1057 the family moved back to England at the invitation of the childless Edward the Confessor.  His father, Edward the Exile died a few months later—without ever seeing the king—and the children were raised at court.

When Edward the Confessor died in 1066, Eadgar Aetheling was the only surviving male heir of the royal house, but his youth made him an unacceptable choice for a crown that had so many powerful claimants.  After Harold Godwineson was elected King by the Witan, Eadgar apparently tarried at the court, because after the Battle of Hastings, the surviving Saxon elite rallied around him as the true heir.  They even went so far as to elect him King, but as soon as William of Normandy crossed the Thames, Eadgar’s supporters abandoned their Saxon king and submitted to the Norman conqueror.

Needless to say, William kept Eadgar Aetheling as hostage, but at the first opportunity Eadgar bolted and participated in the first unsuccessful revolt of Northumbria. He was a handy figurehead but knew nothing about leading anyone, much less a force of rebels. After another aborted rebellion, he fled England with his family and embarked for Hungary.  However, a great storm drove their ship into the Firth of Forth, where they landed on the north shore near Queensferry and took refuge with Malcolm III, King of Scotland.

This was a lucky accident for Eadgar, because Malcolm fell in love with his sister Margaret and eventually married her, thus obliging the Scottish King to provide shelter and aid for Eadgar’s future incursions into England.  In 1069, Eadgar was the titular head of a rebellion in Northumbria that achieved early success, and even wrested the city of York from the Normans.  However, William came north with a vengeance and broke up the rebellion, bought off Eadgar’s Danish allies, and drove the Aetheling back to Scotland for protection. This was the beginning of the Harrying of the North, and England’s erstwhile king was nowhere in sight.

Although Eadgar stayed in Scotland until 1072, William eventually forced the issue by invading Scotland and demanding the submission of Malcolm.  Malcolm reluctantly complied, but one of the terms may well have been the expulsion of Eadgar, since the Aetheling crossed over to Flanders.  He was back and forth for a couple of years, bringing trouble in his wake, until Malcolm finally persuaded the Aetheling to make his peace with William and give up any claim to the throne.

Although his tenure in England was anti-clamactic, Eadgar did gain a measure of respect on diplomatic missions between Malcolm and William’s heir, William Rufus.  Many believe that he rescued the children of Malcolm III from the clutches of Donald Bane, who usurped the throne after Malcolm was killed. He later led an army that helped young Eadgar wrest the crown back from Donald in 1097. He befriended Robert Curthose, the Conqueror’s other son, went on Crusade, and lived into the reign of Henry I.  It is thought that he lived until 1125, which would have put him at the ripe old age of 75.