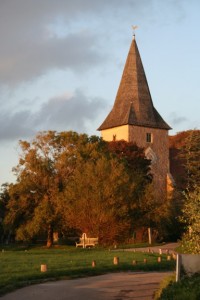 I keep wondering whether the Anglo-Saxons or Danes had an interest in Roman history.  After all, they must have stumbled across plenty of ruins, and maybe even a surviving building or two.  It was gratifying to see the Viking TV show episode where King Ecbert revealed his Roman treasure trove to Athelstan.  Why not?  I’m sure the moderns aren’t the only people interested in ancient history.  So I was very interested to discover that it was thought that King Canute may have erected his Bosham palace on the foundations of Vespasian’s villa, built when the Romans had an encampment there.  Vespasian commanded the Second Legion Augusta which is thought to have landed at Bosham in A.D. 44 and saw active service against the Durotriges and the Belgae tribes in southern England.

Here are some items that historians have listed relating to the Roman occupation at Bosham: they know that Chichester Harbor was used as a Roman port (called Magnus Portus).  They found a Roman foundation under Trinity Church.  In 1800, a colossal head (much eroded) was discovered in a garden; it is thought to have belonged to Emperor Trajan’s statue sited at the entrance to the harbor.  A legionary helmet of late-Claudian period was reportedly dredged up in the harbor. Excavations uncovered pottery, midden pits, even wallplaster and opus signinum (Roman waterproof mortar). In the 19th century a roman footbath was discovered in Bull’s Garden, next to Bosham churchyard.  In 1832 near Broadbridge house, they discovered the foundations of a building, with walls over 2 feet thick and 6 feet deep with a 6 foot circular bath, an atrium and other rooms, thought to have been used by the troops.  Antoninus coins were found embedded in the tile mortar.  It is said that archaeologists found the remnants of an ampitheatre, and also a Roman mill-race (possibly the same where Canute’s daughter drowned).  And so, the list goes on and on.

Canute’s residence has been customarily called Stone Wall and was probably sited near the harbor.  Remnants of a large trough possibly for holding drinking water were discovered nearby.  Some think he built his villa on the spot of the old manor house.  It seems that the exact location of both Canute’s and Vespasian’s villa are still disputed… and even their very existence.  However, local tradition goes a long way, and I say it trumps the experts every time… at least for the Historical Novelist!

4 thoughts on “Canute’s Palace at Bosham”