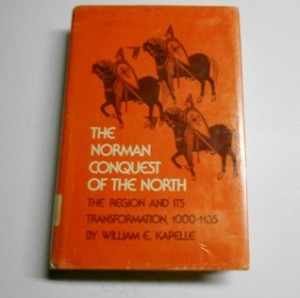 I had to order this book direct from England, but the title fell right into the middle of my research and I am so glad I stumbled across it. It’s hard for me to believe someone went to so much trouble to document every smidgen of information about this period, but it seems that William Kapelle left no stone unturned. Overall, I concluded that if he didn’t mention an item, then it was not to found anywhere. He has done such a good job connecting the dots, I was finally able to somewhat untangle the complicated shapshot of pre-conquest Northumbria, which was my focus.
For instance, in the first chapter he gave us three maps of Northumbria: Political Divisions (what I would call counties) in 1000; Northern Geographic Names (such as vales, dales, mountain gaps, and rivers) and a Terrain Sketch map. I found myself referring to these maps all the way through the book, for they helped explain important boundaries and invasion routes. Especially in the west, it seems that the same territory is known by different names depending on the decade. Is it Strathclyde, Cumbria or Cumberland? His Genealogical Tables were equally important to me, because the relationships between people (and recurring names) can be mind-numbing. For instance, there are two Cospatrics I’m concerned with; the tables finally helped me figure out that one was an uncle-by-marriage to the other, and from which branch of the family each was descended.
But the book goes way beyond identification. We get a very good feel for what Siward’s Northumbria felt like when doomed Tostig took over. Why did Siward put together an invasion to place Malcolm on the throne of Scotland? We discover that this wasn’t the first attempt at controlling his borders by placing a friendly King on the Scottish throne. In the mid-1040s, Siward led an army over the border in an attempt to replace Macbeth with Malcolm’s paternal uncle Maldred; this invasion ultimately failed and he tried again when young Malcolm was old enough to reign. Siward’s secondary aim was to control the most likely invasion routes from the west (through the mountains) by annexing Cumberland, which Malcolm was later to recapture for the Scots, much to the discomfiture of Tostig. There were many loose ends Kapelle addressed, and once again I have filled my pages with bookmarks.
Then he goes on to the Conqueror and the Harrying of the North. This section was written logically and without the usual outrage; there were many steps that led to William’s unfortunate solution, and perhaps he wasn’t quite the monster he is usually made out to be. His horrific campaign was more a matter of failed policy rather than pure maliciousness. He imposed new taxes to pay for his occupation, he bungled appointments in the north—first with Copsig (Tostig’s old agent), then with Cospatric, who helped lead the 1068 rebellion. “The revolt of 1068 had resulted from William’s failure to govern the North through its native leaders, who had, in fact, led the resistance to the king. He was thus left with no realistic alternative but to replace them with Normans.” William had learned about the tactics of the northerners, who retreated into the mountains and waited for him to go away, “and he now adopted a plan that would make it impossible for the North to revolt after his departure.”
But William’s problems with the North did not end with the harrying. Although most of the devastation was in Yorkshire and a little bit into Durham, “Norman rule was restricted to the east coast plain and to the western plain as a result of the harrying. Between there was brigandage.” For the rest of his reign and beyond, William was faced with a myriad of problems that he was neither willing nor able to control. In the Domesday book, Kapelle hypothesizes that much of Northern shires seemed empty, not because they were uninhabited, but “The Normans did not actually survey many of the Pennine villages and all of northern Lancashire, probably because they did not control these areas.”
It’s a lot to take in. But there is much more, and I suspect that only a dedicated Northumbrian scholar can absorb the plethora of information. We learn how the Normans eventually repopulated the vacant farms with their own manors. We get a lot of details about manorial estates, agriculture, and functioning churches. By the reign of Henry I, the Normans ultimately founded a new aristocracy in the north. Nonetheless, the native Anglo-Saxons eventually creeped back into prominence, as Henry I realized that local men still made the best governors.
It’s possible that Kapelle did a bit of extrapolation in the early part of the eleventh century, but his statements and hypotheses were well documented with over 50 pages of notes and 18 pages of Bibliography. Every time I reread a chapter I discover something new.
[Widget_Twitter id=”1″] [spider_facebook id=”1″]