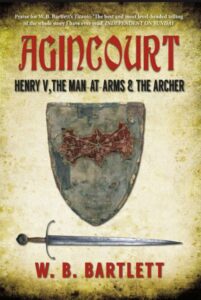 This book is a very solid overview of not only the battle but events leading up to it, from the beginning of Henry V’s reign, the coup attempt at Southampton, the siege of Harfleur, and the long detour the army had to make to find a crossing of the Somme. It’s not until about halfway through that we get to the battle. I’m not complaining, mind you. You can’t tell the story without the background. It’s just that I found the book description a little misleading, as was (in my opinion) the statement on the back cover that we see the battle “through the eyes of key participants”. I’m very deep into my research by now, and I bought this book hoping I would get some really specific stuff, about individual archers, some of Henry’s captains, etc. I should have known better. Agincourt has been gone over meticulously; there’s only so much stuff that’s ever going to come to the surface unless some researcher gets really lucky. With that said, this is a very good book for anyone getting started on their research. The narrative is solid and we get some good historical background. For instance:

His (Henry V) deep piety has been much remarked on and his knowledge of Biblical precedent had featured in the campaign before, such as when he suggested to the townsfolk of Harfleur that he would use the powers allocated by God to a king chastising his subjects as outlined in the Book of Deuteronomy. The whole expedition has been given the impression of something approaching a Crusade by the king, as an act sanctioned and approved by God.

Henry V and his motivations were reasonably discussed, though I really didn’t get the impression I was seeing the battle through his eyes or anyone else’s. But that didn’t matter too much; I came away with a substantial understanding about how the army dealt with their hardships along the way, and even got a good overview of the French side. I thought the Harfleur siege was explained in good detail as well. Unfortunately for me, there wasn’t anything I hadn’t already read before, which made sense once I looked at the bibliography; all the sources used were secondary works. Regardless, the book was interesting, well written, and flowed very smoothly.