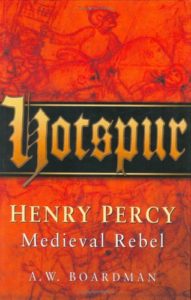 This is an extremely well-written book about one of those enigmatic heroes who was so well depicted by Shakespeare that we’ll never entirely shake loose from the vision he gave us. I think the author has done a remarkable job trying to remove fact from fiction, considering that historical Northumberland is pretty much a foreign country to us. We see Hotspur as a personification of the ideal knight as understood by his contemporaries, rather than an anomaly: “Thousands of dead, pillaged lands, war crimes against civilian populations and a number of other ‘unchivalrous’ deeds give us cause to question the medieval knight’s habitual need to prove himself through violent action; but this is exactly what it meant to live and breathe the code in a world where, like today, it was perfectly acceptable to destroy a country’s infrastructure and dismiss civilian deaths as collateral damage. In the medieval world, this WAS chivalry in its purest form…” It was Hotspur’s motivation to be the best, most chivalrous knight in the world and he pushed himself to extremes in order to achieve his goals. Naturally restless, he craved action and preferred dangerous assignments to boring garrison duty. And apparently he was very good at his job, which is why the Scots gave him his nickname.

We get a good feeling for what life was like on the marches between England and Scotland, and how violence and raiding was a part of life they understood all too well. The Percies were a law unto themselves, and ruled the north almost as kings; only a man born and raised in such an environment could control the tempestuous Scots. In this book, plenty of attention was given to Hotspur’s impetuous father, Henry Percy 1st Earl of Northumberland as well as his uncle, Thomas Percy—warrior, diplomat and politician—who served as Richard II’s Steward of the Household before deserting to Bolingbroke. Both men were influential in Hotspur’s life. His father, to all appearances, was autocratic and kept young Hotspur under his thumb for much of his son’s adult life. Chafing under his father’s harsh authority could have been one of the reasons Hotspur broke away on occasion and made his own decisions—often with disastrous results. His uncle Thomas was more puzzling; his decision to rebel against Henry IV at Shrewsbury has never been satisfactorily explained. Even the king was caught by surprise, so successful were his pursuits up to that point. Apparently Thomas was a family man first and foremost and supported Hotspur to the end, even as Earl Henry mysteriously failed to show up at the fatal battle of Shrewsbury. In the end, Hotspur was defined by the predatory age he lived in, “Cradled in war, and trained in all respects to deal with local border raiding, his main obligation was to hold by force that which his ancestors had previously won.” It is a fascinating story about a character out of legend.