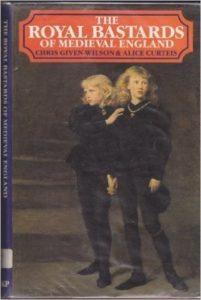 I found this book to be surprisingly diverting and helpful. The paper book cover shows that famous romantic painting of the two princes in the Tower by John Everett Millias, so I was half-expecting yet another repetition of arguments pro and con about Richard III’s involvement with their murder. In actuality, the princes are given a nod, but the true subjects of this book are shown sorely-needed attention as they are often glossed over in histories despite the fact that many of them were quite influential. For instance, I knew all about the Beauforts (John of Gaunt’s bastards who were later legitimized), but didn’t really give much credit to Henry VII’s great-grandfather, John Beaufort, as the head of the Tudor dynasty (on the maternal side). Without Beaufort’s royal blood, Henry might not have dared an attempt at the throne. Other royal bastards, such as Geoffrey Plantagenet (son of Henry II), and Robert of Gloucester (son of Henry I), were key actors in major events and given their own chapters.

The structure of this book gives us an explanation of how important (or at times unimportant) legitimacy was viewed throughout the middle ages. An extremely long introduction gives a good overview of marriage, divorce, and the Catholic Church’s views throughout this period, which is more than helpful. Consider this: since the twelfth century, “the church was teaching not only that the consent of the man and the woman was the vital prerequisite for any marriage, but also that that consent of any other person—parent, lord or whatever—was unnecessary. Among the aristocracy and royalty, it is only in modern times that this idea has really gained acceptance: parentally arranged marriages have remained common among the upper classes right through to the twentieth century…Even for the elite, the doctrine of consent did have one crucial result: if a man and a woman did flout the wishes of their parents or guardians and get married, perhaps secretly, and if it was then proven in a church court that they had both consented to the marriage, the marriage remained valid in the eyes of the church…” I can’t help but think of the secret marriage between Joan, the Fair maid of Kent and Thomas Holland which fell into this category.

Especially in the early days after William the Bastard made his mark on history, bastards could fare just as well as their luckier brothers (short of inheritance). Geoffrey Plantagenet is the only son of Henry II that stuck with him all the way to the end, even when all his legitimate brothers rebelled. He ended up as Bishop of Lincoln (hotly contested), archbishop of York (also hotly contested) and chancellor of England, though when Henry II died his career took a downward spiral. He was in constant conflict with his brothers and died in exile, a bitter man. After Edward III’s time, illegitimacy began to take on more political overtones, and accusations got bantered about that could potentially add strength to the opposition party. Even Richard II was accused of being a bastard (because his mother’s secret marriage ruined her reputation). It was thought that Prince Edward, son of the unstable Henry VI, was the illegitimate son of Queen Margaret, which added fuel to the Wars of the Roses fire. George, Duke of Clarence was executed after accusing his brother Edward IV of being a bastard. And of course the Princes in the Tower were removed from the royal inheritance by their uncle Richard III.

On the other hand, by the time of Henry VIII (whose father was stained by the curse of illegitimacy on both sides of his family) it looked like the pendulum might swing the other way; if Henry FitzRoy had lived past his teenaged years, it was commonly thought he might be declared heir. And in 1685, the popular son of Charles II, James Duke of Monmouth, made a serious grab at the crown, only to be defeated in battle at Sedgemoor and beheaded two days later. “He was the last royal bastard in England to entertain such ambitions. It is one of those perverse ironies of our history that neither Henry I, who fathered more bastards than any other English king, nor Charles II, who ran him a close second, was able to pass his crown to a legitimate son.” Nonetheless, it makes for great reading!